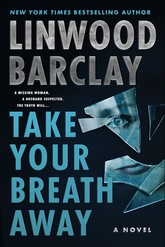 Take Your Breath Away

One weekend, while Andrew Mason was fishing, his wife, Brie, vanished without a trace. Most everyone assumed Andy had got away with murder, but the police could never build a case. For a while, Andy hit rock bottom—he drank too much to numb the pain, was abandoned by all his friends save one, nearly lost his business, and became a pariah in the place he once called home.

Now, six years later, Andy has finally put his life back together. He sold the house he once shared with Brie and moved away. To tell the truth, he wasn’t sad to hear that the old place was razed and a new house built on the site.

But Andy’s peaceful world is about to shatter. One day, a woman shows up at his old address, screaming, “What’s happened to my house?”