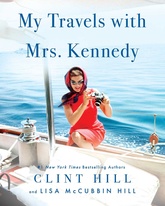 My Travels With Mrs. Kennedy

Around the world with Jacqueline Kennedy

While preparing to sell his home in Virginia, retired Secret Service agent Clint Hill discovered forgotten photos, handwritten notes, and treasured mementos from the trips on which he accompanied First Lady Jacqueline Kennedy as her Secret Service agent.

With this breathtaking memoir, he reveals the depth of the relationship that developed between them as they traveled around the globe. Hill recounts the tender moments, the private laughs, and the wild adventures. He also writes of the year he spent protecting Mrs. Kennedy after her husband's assassination, a time in his life he has always been reluctant to speak about. All these memories are brought vividly to life with more than two hundred photos, many of them previously unpublished.